If your guitar is available for sale, please give us a call or an e-mail. We are available 7 days a week and you can expect a friendly and pleasant experience.

The Precision bass was the first production run solid body bass released by Fender in late 1951.  The bass was equipped with a one piece maple fretted neck and one single coil pickup. The production color was Blonde. There are two bridge saddles, and the strings are loaded through  back of the body. The body is made of Ash.

Contours are added to the front and back of the body in 1954 , the body edges are more rounded. The bridge saddles are changed to steel. A sunbrust two tone color was introduced in 1955 and a white pickguard in mid 1954. The serial number was moved from the bridge to the 4 bolt plate on the back of the body.

Very helpful to verify the Logo on a Stratocater is original and correct for the era of the body.

Very Helpful in Dating a Vintage Guitar when Serial number not present or unclear.

Gibson used Factory Order Numbers (FON) on some of their guitars from about 1908 to 1961. Many times you will see both a factory order number and serial number. The FON was stamped for each batch in production and each instrument in the batch during the early stages of the build.

The FON can be very helpful dating the instrument as that might be the only marking. They can also be used together with the serial number to more precisely date the instrument.

Gibson used four different patterns of FON’s through out the years.

FON: 1908-1923
The first FON’s are usually ink-stamped on the neck block inside the body and have of a three to five digit number with no suffix

FON after WW II: 1949-1952
After WW II FON’s were hit or miss and not very good for dating or not present on the guitar. When present they were rubber stamped on neck block or on back of the headstock with numbers from 100 to 9999.

I’m starting this blog to give you some tips on how to sell your vintage guitar. To start this off I’m going to list some red flags you need to be aware of when contacting potential buyers. Much more to come..

Around the middle of  1964  major changes occurred. The info below is very useful for dating a Gibson guitar in cases where serial numbers were repeated or unclear.

2. Most Hardware moved from Nickel plated to Chrome, this included bridges, tuners and tailpieces.

3. Most serial numbers moved from 5 digits to 6 digits.

4.  Kluson Tuners were stamped with 2 lines down the back instead of one line down the center of the back with the words Kluson Deluxe.

There is more information here on the our Guitar identification Page.

1968 -69 were dark years for Gibson and the Norlin Corporation buy out began. Gibson needed revenue and to use up old parts. Less than perfect tops used to make the J-45 and B-25 were sprayed a solid color of red or black and a few brown . A white screwed down pickguard was used. Many of the instruments were 4 piece tops and marked seconds. Late in 1968 the bridge was reversed with the bell

y facing down , and the Gibson logo on the pickguard was removed.  There is more  Gibson Acoustic Flattop Model Information here. 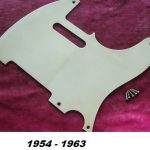 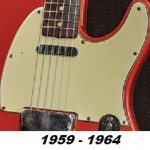 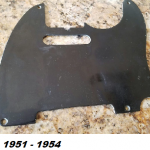 The first Pickguards on the Telecaster were one ply black. The earliest ones were a fiber material then later made of bakelite with 5 holes for screws. In Late 1954 the single ply white pickguard was introduced.

The Telecaster Custom was introduced in 1959 and had a 3 ply white/black/white celluloid pickguard with 5 screw holes. This is also used on custom color Telecasters.  The single ply white pickguard remains standard equipment on the blonde Telecaster.

In mid 1959 all the telecaster pickguards have 8 screw holes.

In mid late 1963 all the telecaster models have the 3 ply white/black/white pickguard, the celluloid “Green Guard” is dropped after 1964 and replaced with plastic.

Gretsch Serial numbers can be confusing an unclear at times. Here are some helpful ways to date them from unique features of the era.

Fingerboad inlays:
The Half moon sometimes referred to as thumbprint or Neo-Classical appeared in 1957.  These came on the higher end Gretsches. So if you see a Gretsch with these inlays you know it was made in 1957 or later.

Name Plates:
Metal name plates that were engraved started being used around 1958 and appeared on the White Falcon, Nashville (1966), White Penquin (1959). In 1965 it appeared on the Tennessean. Earlier models had no name plate so this is a good dating method when serial numbers are unclear.

Fake F holes on some models:

In 1957 Gretsch used simulated F-holes on the Country Gentleman, then in 1962 the F-holes are just painted on the guitar.

Padded Back:
The Padded Back was fazed in around 1962, and is a normal stock feature on the White Falcon, 6120, and 6122 and Country Club models.

You can look up vintage Gretsch Serial Numbers here.

Martin guitars have a two part designation the body size a hyphen then the model located up inside the guitar on the block where the neck and body meet.

The size designation at widest point (lower bout) measurement is as follows:


Here is a link to my Martin Photo Gallery showing different Models and sizes.